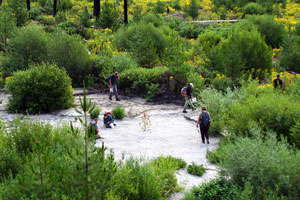 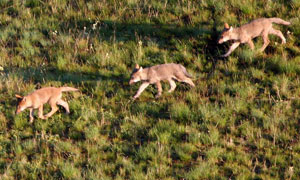 Wolves live in family groups consisting of a breeding pair, their offspring, and several related helper wolves. Mortality, however, can affect this family group structure and result in smaller packs with adopted, unrelated individuals. Little is known about how characteristics of groups (i.e., size, composition, tenure) affect population growth. Furthermore, group characteristics may also affect individual behavior, group stability, and reproduction. States in the Northern Rockies recently initiated public hunting and trapping seasons for gray wolves and our study is well-positioned to answer important questions about how that new source of mortality might affect gray wolf pack composition and reproduction.

Preliminary wolf population modeling shows that established packs (i.e., in existence for > 3 years) have higher survival than new packs, particularly during periods characterized by high competition between packs. This lends support to our hypothesis that group stability may be important for wolf population growth. Full analyses and insights into the effects of wolf pack stability on population growth will be conducted once all of the data are compiled.

We began genetically sampling wolves in Idaho in 2008 and currently have a multi-year dataset for packs in central Idaho that spans both before and after hunting and trapping began. In 2013, we completed genotyping samples from wolf packs collected during 2010-2012 in Idaho and 2012 in Alberta and Yellowstone National Park. We continued field surveys in summer 2013 in these three focal study areas. We surveyed 435 potential wolf rendezvous sites between the three study areas and collected 1,885 fecal samples for DNA analysis in 2013. We detected 14 litters between the three study areas. DNA analyses of collected samples are currently underway and will identify breeder, helper, and pup in every pack, i.e., a pack "pedigree." Tracking these pedigrees over time will allow us to examine how pack composition and recruitment change under the influence of human-caused mortality from hunting and trapping.

Lastly, we have finished gathering wolf satellite-collar location data from multiple collaborators that can be used to answer questions about how wolf pack composition affects helping behavior in packs. Preliminary analyses using data from Idaho wolves indicate that female and male helper wolves differ in the amount of time they spend guarding pups. Changes to pack composition may affect such helping behavior. We will conduct full analyses exploring the effects of group size and genetic relatedness, as well as prey and predator abundance, once all of the data are compiled. We have made substantial progress collecting the data necessary to adequately answer how packs affect population growth and how population management (i.e., hunting and trapping) might, in turn, affect packs. We plan to continue field sampling through 2014 and complete analyses and publish full study results in 2015.