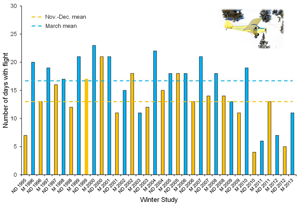 ×
Figure 1. Fixed-wing airplane flights are an important way that we detect wolf kills. The long-term average for flights has been 13 during early winter study and 17 for late winter study. 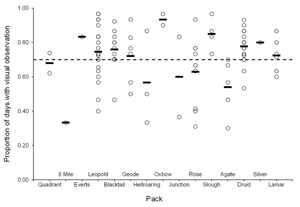 ×
Figure 2. Wolves have been observed by ground crews on ~70% of all days during winter study monitoring periods (the dashed line displays the long-term average). Each circle displays the % of days a particular pack was seen during a single 30-day winter study period and the bold, black dash for each pack displays the average % for that pack. 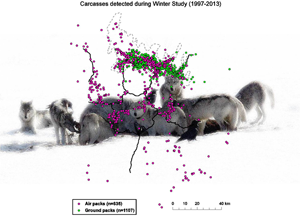 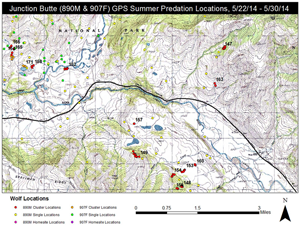 ×
Figure 4. Example of a map displaying GPS clusters. Maps such as this one are produced for 1-2 packs each week throughout the summer. Field crews then hike to each cluster and search all of the locations identified as belonging to a cluster (≥ 2 locations, with each location being within 100 meters of its nearest neighbor). In this example, red and orange circles are wolf locations that would be searched by crews. Such searches have resulted in detecting approximately 600 carcasses from 2004-2013. 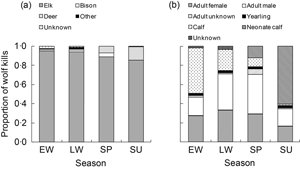 ×
Figure 5. Seasonal composition of wolf-killed prey in Yellowstone's Northern Range throughout a 14-year period (1995–2009) by (a) species and (b) age and sex of elk prey. In (a), 'Other' represents moose and bighorn sheep. On the x-axis, EW = Early Winter, LW = Late Winter, SP = Spring (May), and SU = Summer (June and July). Panel (a) displays that most wolf-killed prey are elk. It also displays that wolves prey more often on deer in the spring and summer. More recently, wolves have begun to prey on newborn bison calves more frequently in the spring and summer. Panel (b) shows that wolves often prey on newborn elk calves during summer (represented by the gray hatched bar). During early winter, wolves continue to frequently prey on ~6-month old elk calves (represented by the dotted bar). During late winter and spring, wolves most commonly prey on adult elk. (Reprinted from Metz et al. 2012. Seasonal patterns of predation for gray wolves in the multi-prey system of Yellowstone National Park. Journal of Animal Ecology, 81, 553-563.) 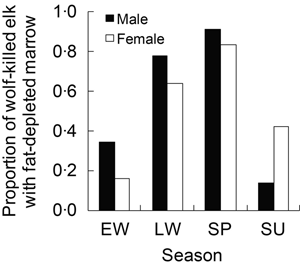 ×
Figure 6. Proportion of wolf-killed adult elk with fat-depleted bone marrow (<70%). On the x-axis, EW = Early Winter, LW = Late Winter, SP = Spring (May), and SU = Summer (June and July). Bone marrow is the last fat reserve that elk utilize and bone marrow percentages < 70% correlate to an animal having < 5% body fat. This figure displays that during periods when food is limiting for elk (late winter and spring), most elk that wolves kill are in relatively poor nutritional condition. (Reprinted from Metz et al. 2012. Seasonal patterns of predation for gray wolves in the multi-prey system of Yellowstone National Park. Journal of Animal Ecology, 81, 553-563.)

×
Figure 7. Seasonal variation in several statistics associated with the feeding ecology of wolves from Yellowstone's Northern Range. Panel (a) represents the number of ungulates acquired, the number of ungulates killed, the number of elk killed or the number of non-neonate elk killed per wolf per day, panel (b) displays the biomass (kilogram) of ungulates acquired or killed per wolf per day, and panel (c) displays the mean kilograms of ungulate prey per acquired carcass. An important thing to note in this figure is that when comparing panels (a) and (b), the black and gray lines form different general patterns. Specifically, the number of prey acquired is at its highest point in panel (a) during summer, but in panel (b), summer is when this rate is lowest. Panel (b) displays that food may be limiting for wolves during summer. Each data point represents a mean with sample sizes of 36 (November–December), 36 (March), 6 (May), 7 (June) and 5 (July). Filled circles represent prey acquisition rates (i.e. including carcasses of all ungulate species), grey circles represent kill rates (i.e. including all ungulate species, but excluding scavenged carcasses), open circles represent kill rates of elk, and diamonds represent kill rates of nonneonate elk. Diamonds are not displayed for November–December or March because neonates are not present during those months. The lines connecting adjacent data points highlight the average trend that exists between sampling periods, and the dotted line in panel (b) represents the estimated minimum daily energetic requirement for NR wolves (approximately 3.7 kg per wolf per day, see Metz et al. 2011). Vertical bars are standard errors. (Reprinted from Metz et al. 2012. Seasonal patterns of predation for gray wolves in the multi-prey system of Yellowstone National Park. Journal of Animal Ecology, 81, 553-563.)

Historically, most research of wolf predation has been conducted in the winter, primarily because wolf-killed prey are easier for researchers to visually detect (via direct observation or snow-tracking) and wolf packs are generally travelling together (in the spring and summer, wolf packs produce and care for pups, often leaving the den in smaller groups when searching for food). Although most work has been conducted in winter, recent advances in GPS technology have opened a new window of opportunity to study predation during snow-free periods as well.

Research on wolf predation in Yellowstone National Park has been conducted since wolves were reintroduced in 1995. This research assesses wolf predation patterns during two 30-day monitoring periods in early and late winter (mid-November to mid-December and March). Throughout the world, most research attempting to visually observe wolves on kills is conducted from a fixed-wing airplane. In Yellowstone, we also attempt to detect wolf kills from the airplane (the long-term average for flights during each winter study is 15 days; Figure 1). However, because we commonly observe wolves from the ground, we also attempt to locate a few wolf packs from the ground each day during winter studies. Through this effort, ground crews have located wolf packs on about 70% of days (Figure 2). Today, we continue to utilize these monitoring techniques to assess wolf predation in winter (Figure 3).

Additionally, we also began monitoring wolf predation during spring and summer (May-July) in 2004. To study wolf predation in the summer, we deploy GPS collars that collect a location of where the wolf is every 30 minutes. We then download the data from the collar every week and identify "clusters" of locations where the wolf has spent at least 30 minutes (Figure 4). After we identify these clusters, members of our team hike into each cluster to determine if the GPS-collared wolf had been feeding on a kill.

What have we learned about seasonal predation patterns?

Wolves prey primarily on elk during all seasons when we monitor wolf predation on the Northern Range (Figure 5a). Among elk, wolves prey primarily on newborn elk calves during summer, continue to prey on elk calves during early winter, and prey mostly on adult elk during late winter and spring (Figure 5b) when the adult elk killed by wolves tend to be in poor nutritional condition (Figure 6). In addition to understanding how the composition of prey changes throughout the seasons of the year, we have also begun to understand how kill rate changes. Kill rate is a statistic that describes how often a predator makes a kill and it can be expressed in two ways. First, kill rate can be expressed as the number of prey per predator per unit of time (i.e., day, month, or year). Conversely, kill rate can also be expressed as the biomass of prey per predator per unit of time. Our work has displayed that the impression of how kill rate changes throughout the year can be vastly different depending on if kill rate is expressed in the number of prey or the biomass of prey (Figure 7a, b). This observation is caused by the average size of a carcass differing between summer and the rest of the year (Figure 7c) and by wolves not being able to kill enough small prey (e.g., newborn elk calves) to compensate for that seasonal size difference in prey that they kill. Ultimately, our work shows that summer is the most difficult time of year for wolves (Figure 5b). Therefore, understanding differences in summer kill rates among years may help us better understand annual changes in wolf population numbers.

Finally, for only summer, collecting data on predation patterns over the last decade has required ~8,000 miles of hiking by dedicated field assistants. Such effort is difficult to maintain each year and we are therefore using the GPS data collected from > 20 wolves to build spatial models that predict wolf kills on the landscape for both summer and winter.