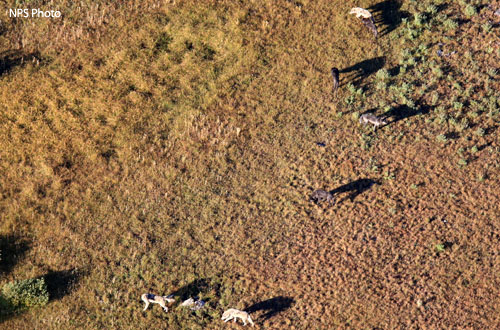 Wolf 527F, a dispersing wolf from the Slough Creek pack, joined up with an uncollared gray male and subsequently became the alpha pair of the Cottonwood pack. This pair bred and denned in 2008 but did not successfully produce pups until 2009. Throughout the pack ‘s duration, additional Slough Creek dispersing wolves joined the pack. In March 2009 one of the uncollared black Cottonwood wolves was observed with hairloss on his tail, attributed to mange infection. In the 2009 Montana wolf hunt, two collared (716F, 527F) and two uncollared Cottonwood pack wolves were legally harvested. After October 2009 there were no radio-collared wolves left with which to track the pack and no additional sightings were recorded.