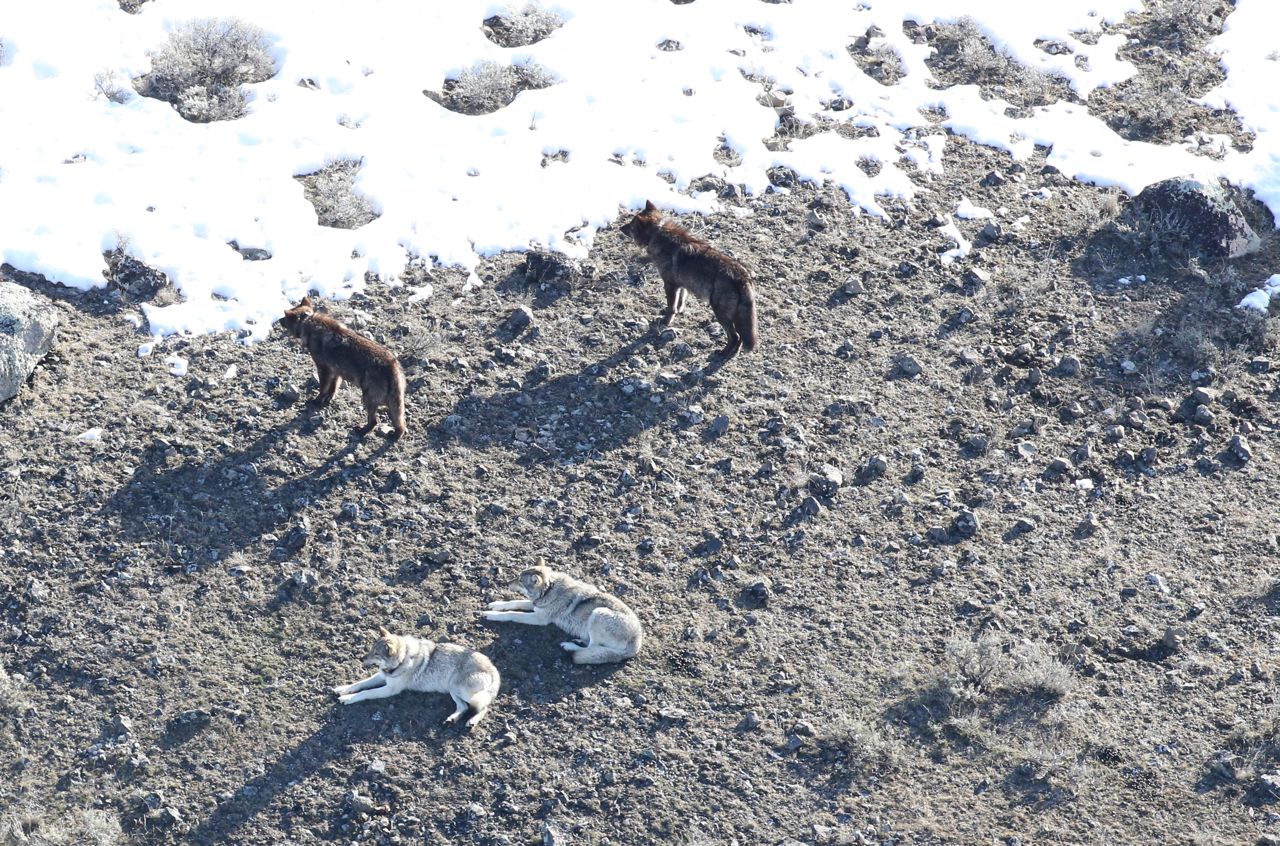 The Junction Butte pack formed in April 2012 when 838M dispersed from the Agate Creek pack with two females. The two Agate females quickly disappeared but later that month 838M was seen with two new females and an uncollared gray adult nicknamed “Puff”, originally from Blacktail. During the first year, this pack had 3 collared wolves (838M, 777M, 823F) join the pack and subsequently die, leaving the pack un-trackable using telemetry equipment. After 870F sustained a neck injury during the 2013 breeding season and lost her status as the alpha female, “Ragged Tail” paired with the alpha male “Puff” to become the new alpha female. “Ragged Tail” disappeared and 870F regained her alpha status; the fate of “Ragged Tail” is unknown. Around the same time, the alpha male “Puff” also disappeared (fate unknown). 890M took over as alpha male and paired with alpha female 870F until both were replaced by 911M and 970F as alphas in December of 2014. Three Junction Butte females, including 970F, 907F and 969F, were seen breeding during the 2015 mating season. In September 2016, 911M was killed by Prospect Peak wolves. After 3 wolves were harvest in late 2016, and another was not seen again, Junction Butte was only seen sporadically. The 2017 breeding season was odd; 969F was displaced as alpha female by her sister, 907F. 4 wolves from Prospect Peak took advantage of the opening in this pack and seemed to become members. The Junctions denned in April 2017, but no pups survived. In April 2018, we believe that at three females had pups at the Slough Creek dens – 907F, 969F, and an uncollared black female. 996M displayed very odd behavior towards the pups, potentially killing a few of them. Only three pups survived to the end of the year. Spring 2019 brought another strange denning season. Four females produced pups. 969F and the uncollared black female attacked and severely injured 907F, who relinquished her alpha position to the black female. 969F then ate and buried 907F's pups. 969F denned near a popular trail, and the pups were habituated to human presence despite hazing efforts from Wolf Project staff. This habituation was observed into the early winter. 1109F produced at least 3 pups on Specimen Ridge which joined the pack in the fall. Two pups were killed by vehicles in November. Of the 17 pups produced by in 2019, 8 pups survived to the end of the year. 969F died in January from malnutrition/intraspecific conflict. [Updated 1/2020]