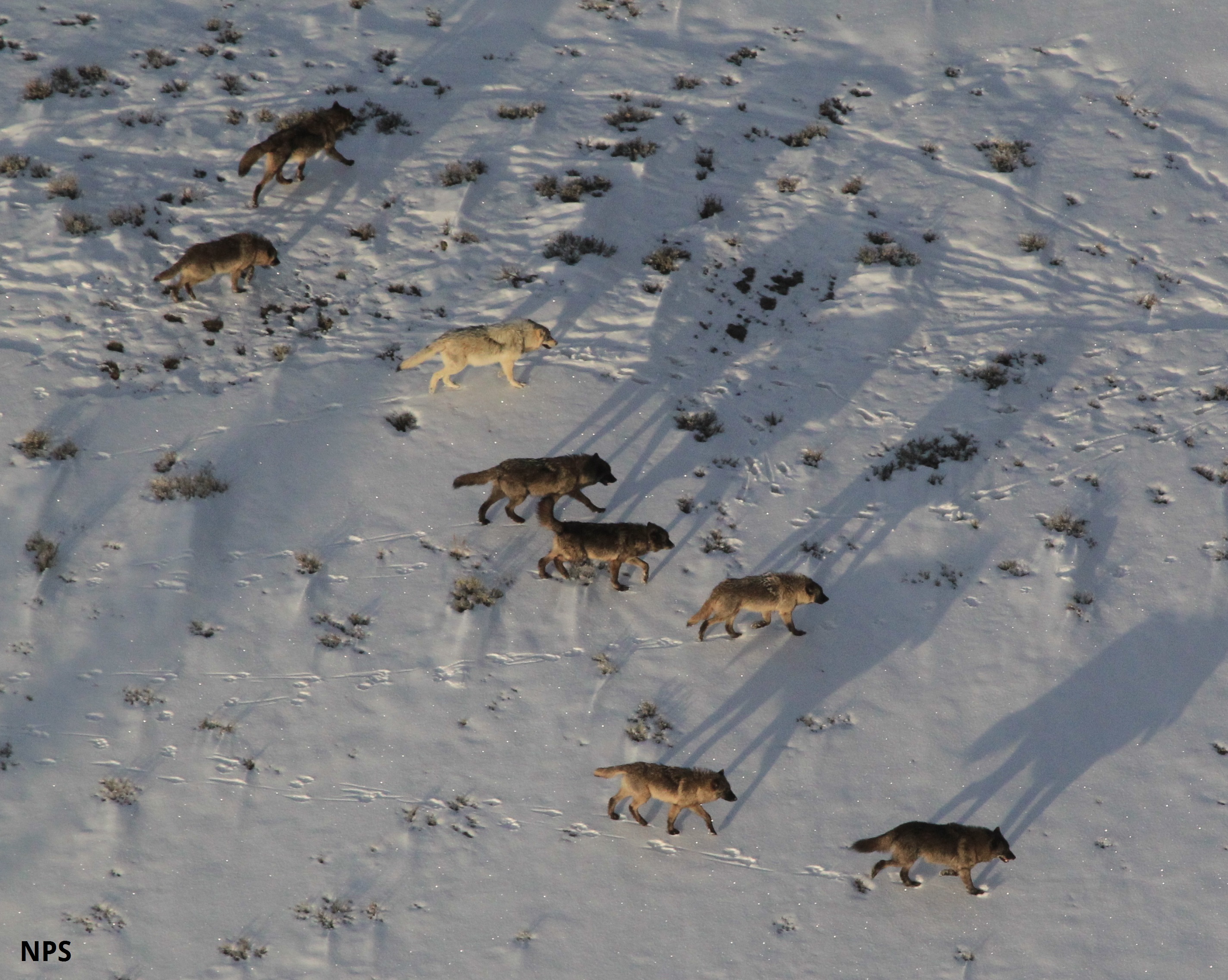 The 8 Mile pack originated in southwest Montana and was named after a creek in Paradise Valley. Montana Fish, Wildlife & Parks radio-collared a large black male (SW763M) from this pack near Tom Miner Basin (SW denotes southwest Montana). This pack was considered a boundary pack until 2011 when the alpha female denned within the park boundary, in Sepulcher Hills, for the first time. While establishing itself as a park pack, 8 Mile displaced the Quadrant Mountain pack and had multiple interactions with the Blacktail Deer Plateau pack. The pack’s first documented alpha male, 871M, was radio-collared in February 2013, and led the pack with alpha female 909F (“Red/Brown”), until he was killed by a neighboring pack in October of 2014. In February of 2014, SW763M, 821F, and an uncollared female left the 8 Mile pack to form the Prospect Peak pack. In July 2016, once alpha male 910M, left the pack to form the Cinnabar pack, which resides slightly more west than 8 Mile. More recently, the 8 Mile pack was led by alpha female 909F and an uncollared alpha male. Yet in April 2017, 909F was found dead and pregnant with pups, confirming her status as breeder. She was injured by an ungulate in a hunt and subsequent injuries killed her. There were no surviving pups from the 2017 breeding season; we will know whether or not this is due to canine distemper after capture and serological analysis this winter. This pack often splits into smaller groups, but together, total 17 wolves. 963F, a former breeding female, appears to have left 8 Mile for a Montana pack. But, 2018 still seems to be a successful breeding year for this pack with probably two active dens. In the winter of 2018/2019, 8 Mile had many new male members from the Wapiti Lake pack, including: 1105M, 1106M, 1015M, and a few uncollared wolves. They seemed to have driven off the aging alpha male 962M, who was later harvested legally in Montana north of the park. Around that time, 1005F, 1119F, and 1049F split off of the main 8 Mile group and formed 1005F subgroup. They merged with Crevice Lake pack to form Phantom Lake. The alpha female of the pack is Brindle, a black female who is graying with age. 8 Mile wolves utilized their historical dens in 2019 and produced 11 pups from 2 litters, 8 of which survived to the end of the year for a total of 17 wolves in the pack. 1105M was found dead from infectious disease/bacterial infection outside of the park in early 2020. [Updated 1/2020]